My story of playing the mandolin

I took a year off night school in 1952 and did three things, i.e. joined a gymnastic club and a badminton club, and learned a musical instrument which happened to be a tenor banjo. When I heard my music teacher, Walter Smith, a Maori, play mandolin, I said to myself, "Why didn't I learn the mandolin it sounded so nice."

Many years later, whenever any mandolin music came on the radio, I pointed this out to the family. When our two sons, Keith and Colin, then aged 9 and 7.5, said they wanted to learn music, Keith chose guitar and Colin, without any prompting from me, chose mandolin, which pleased me immensely.

I noticed in the Western Leader (a suburban newspaper) that a Mrs Doris Flameling taught both guitar and mandolin, so after school, my wife Beth would take our sons for lessons. It wasn't long before they were members of her small orchestra consisting mostly of her pupils.

Eventually, my sons let it drop to Doris that I had once played the tenor banjo and she was round to see me to join the orchestra. At that time, I was preparing the right-of-way to be concreted. Despite the fact that I had not played the banjo for 10 years made no difference to Doris, so I said that I would join after completing the right-of-way. She gave me the music in advance (I played the mandola part), but on the first practice, I couldn't keep up with the children!! On that same Saturday morning, another man my age joined (Bruce Ogg) who played second mandolin, and he had been taught to play the guitar by Walter Smith in the 1940's. Our younger daughter, Diane, (then aged 8) also played percussion for several pieces.

The orchestra practices changed to a Friday night and when Keith and Colin were in their mid teens, they left the orchestra to join the church youth club. I played on for a couple of years and resigned at the end of 1976. In 1986, I went to hear the Orchestra play at a concert in Henderson and was very impressed by their standard and also that the vast majority of players were adults. Isabel Briggs was their conductor, and later I asked her if I could join the orchestra again. Her answer was polite and to the point, "I'm sorry Jack, you can't come back with your banjo!". They had three mandola players, John Flameling, Lynne (Cottrell) Flameling. At this concert, the late Julie Webb played the bouziki for the first time for one of the pieces. Also present at that concert was Ted Smith who had played in the orchestra in earlier years and he subsequently rejoined. So that was the finish of me returning to the orchestra so I thought.

Several years later, while shopping in Green Bay with Beth, there was a notice in one of the shop windows 'Mandolin Teacher ph--- I said to Beth, "Look at that!!" and copied the name and phone number and with a borrowed mandolin, had lessons after work by Mario Bertora, an Italian and in 1990 rejoined the orchestra.

After a few years, Lynne wanted to play first mandolin and I moved to the mandola section. The orchestra has taken me (and Beth) to many places in the North Island, Dunedin, Perth, Brisbane and Sydney. It has been a very enjoyable time playing with the orchestra for 20 years of my retirement. 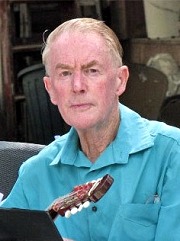 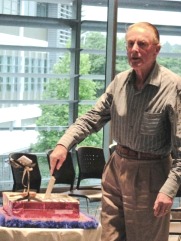