In January 2008, eighteen members of Mandolinata travelled to the International Mandolin Festival hosted by The Sydney Mandolin Orchestra for the Federation of Australasian Mandolin Ensembles, FAME. This represents a huge 70% of our players and was the culmination of eighteen months of fund-raising. The players are grateful to all those who supported them and enabled them to experience the thrill of being part of a full Festival Orchestra of 124 members.


Musicians came together from Brisbane, Canberra, Melbourne, Sydney, Perth, Auckland, Dunedin, Canada, England, Kyoto Japan, and Providence Rhode Island. In just one week of intensive six-hours daily rehearsals, the music that all players had been working on individually was brought to performance level by musical director and conductor, Adrian Hooper, for a public concert on the last night. The works chosen featured Australian composers, - several of them visited the orchestra in rehearsal to give that unique slant on how their pieces should be interpreted.


Throughout the week, groups from several Australasian and International orchestras performed at a series of in-house evenings. Mandolinata, in its turn, presented Three Auckland Nocturnes, by New Zealand composer, Yvette Audain. It was played quite openly as a work-in-progress - the orchestra still has much work to do on its complex patterns - but Yvette and her music were well received by the international connoisseurs of plectrum music.


Did our players enjoy this weeklong immersion in music?
Yes. It was hot, humid, and "full-on", but great fun. Individually members were challenged to play to a higher level of musicianship. But more importantly for Mandolinata itself, because such a high percentage of the orchestra attended it will be interesting to see regular supporters notice a lift in musical sharpness and polished interpretation this year.


The next FAME event will be the annual music camp in Brisbane in mid 2009, and New Zealand in 2011. Tentative plans are already astir! 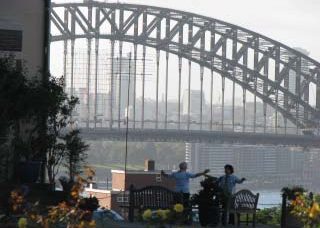 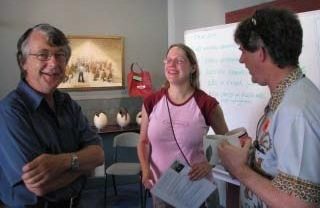 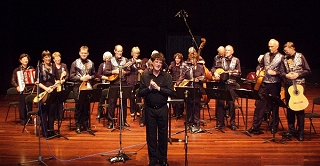